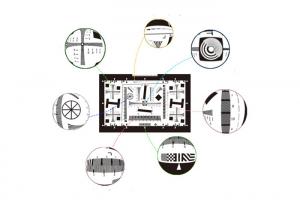 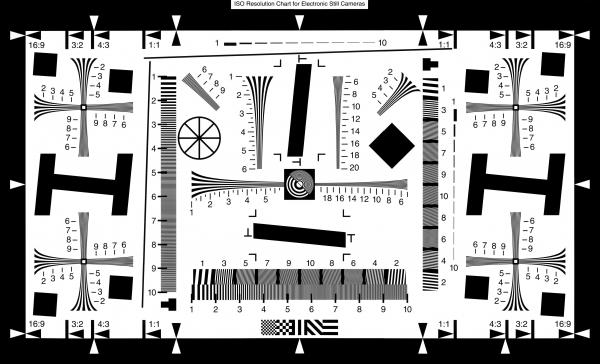 This resolution chart is an adaptation of the features of the ISO12233 standard to higher aspect ratios and also includes higher resolution features.

Note that this chart does not conform to the new ISO 12233:2014 standard, released in February, 2014 (although an image is included in the standard for reference). We recommend the ISO 12233:2014 E-SFR chart for new work that does not specifically require the old chart.

Notes: This chart is used to measure sharpness from slanted-edge patterns (as Spatial Frequency Response = SFR) using the Imatest SFR module. It can also measure resolution from the hyperbolic wedges using the Imatest Wedge module (a part of Rescharts).

•Dual-frequency zone plates on a black square background with hyperbolic wedges in a vertical orientation allow evaluation at 500 to 2000 lw/ph vertical resolution.

•Checkerboard patterns rotated to 45 degrees and made up of squares having 1.5 mm edge length (200 lw/ph) aid in focus and evaluation of aliasing.

•Additional framing arrows are included to define aspect ratios out to 2.4:1.

•This target’s overall size is equivalent to exactly three times that of the ISO12233 standard 1X target.

Guidelines for Usage: This document is not intended to replace the International Standard Document ISO-12233. However, the following guidelines will aid the first use of this chart.

•The chart should be illuminated uniformly (±10% of center luminance) against a surround of low reflectance and with a minimum of flare light. The illuminant should be effectively neutral with respect to either daylight or tungsten illuminants (ISO-7589). Camera white balance should be adjusted to provide equal red, green and blue signal levels.

•The camera should be positioned to provide centered, full-frame-height rendering of the chart’s active area. Use the chart’s framing arrows and horizontal edges to aid positioning. The camera to test chart distance should be noted.

•Where possible, image compression features should be disabled.

•Line width features can be viewed with any file viewer for an indication of the visual resolution limits of the device. International Standard Document ISO12233 contains instruction regarding a quantitative determination of resolution limits. Visual and limiting resolution values should be reported in values of lw/ph.